Skip to content
Holi means burning, burning of evil the negative energy which is spread over the world and surrounded us very badly. In our Hindu mythology, many legends explained the word “Holi”. 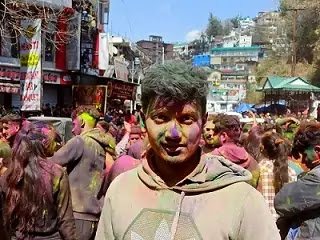 So Holi is an ancient festival of India and still celebrated with a huge craze. Now day’s Holi is not just a festival of India it is also celebrated in many countries outside of India. In many ancient books, it is mentioned that the Holi festival is not only celebrated by Hindu it is also celebrated by Muslims and other religious’s people. Holi is also mentioned in many ancient paintings and rock addicts.
So if we talk about the history of the Holi festival then there are many legends at other-other places. In some places of India, especially in Odisha and Bengal, Holi Purnima is also celebrated as the birthday of Shri Chaitanya Mahaprabhu who was the 15th-century Vedic spiritual leader and considered an avatar of Lord Krishna by his followers but the famous legend which is known by most of the people is associated with the demon king Hiranyakashyap.
Hiranayakashyap was a cruel demon king who wanted everybody in his kingdom to worship only him but to his great disappointment, his son Prahlad became a great (ardent) devotee of Lord Vishnu (Narayan). He tried to kill him much time but he failed to do it. So, at last, he called his sister Holika to enter a blazing fire with Prahlad in her lap. He decided this because Holika had a boon whereby she could enter in the fire without damaging herself. But, she was not aware that the boon worked only when she enters the fire alone. As a result, she paid the price of her sinister desires, while Prahlad got saved by the grace of the god for his extreme devotion. Therefore, the festival was celebrated as the victory of good over evil.
So Holi is celebrated in many ways like in some places married women do fast and worship full moon (Raka) for the happiness and well-being of their families, at some places Holi celebrated by burning big fire. But most of the places Holi is celebrated as a festival of colours. There is one other famous legend that Lord Krishna stated the tradition of play with colors by impone the colour on his beloved Radha and Gopies. So gradually this play gained popularity and become a tradition. Today also people impone colour to each other to exhibit their happiness. Also, colours are mixed in water and filled in balloons and tanks and plunked that water to each other to play some fun games and celebrate eco-friendly Holi. This festival gathered the people so close to each other physically as well as emotionally too.

So here we write a short note on essay on Holli which is very helpful for the students of lower classes.