Skip to content
January falls as the first month in the British calendar and plays an important role in our life. Many of us start so many new works, promises and commitments for that new-year.
So, so many important days are fall in this beginning month of the year like festivals, event, national and important days which plays a big role in our life. So here the list of some important days and dates which will be very useful for the competitive exam point of view. 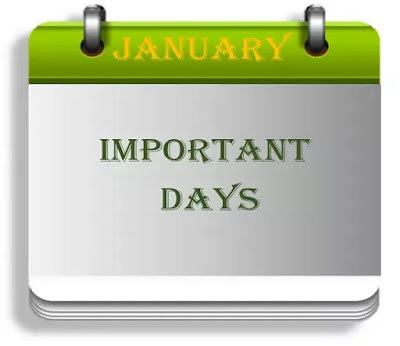 African National Congress Foundation was founded by DayJohn Langalibalele Dube in 8 January 1912 at Bloemfontein. Basic idea behind this foundation was to bring change in political, social and economical change and give equal rights to all people of nation by giving voting right to all and reduce the racism.

This day is celebrated to appreciate the oversees Indian people and communities for their contribution in development of India. This day is also commemorate for the return of Mahatma Gandhi from South Africa to India in 9 January 1915.

On this first World Hindi Conference was held in 1975. On this day every year many cultural and social programs are organised world wide to promote the Hindi Language.
World Laughter Day is also celebrated on this day and it symbolize that the laughing is much important for healthy life to reduce the stress and tension.

He died in 11 January 1966 by a cardiac arrest. He was the second Prime Minister of  Independent India. He plaid main role in freedom struggle and popular for his slogan “Jai Jawan Jai Kisan”.

This day is celebrated to commemorate the birthday of Swami Vivekanand who was the great philosopher and great motivational speaker. He was great personalty.

This is great Indian folk winter festival and mainly celebrated by Sikh and Hindu community.

This day is commemorate because on this day the field martial kodandera M Cariappa took over as first commander-in-chief of the Indian Army.
Makar Sankranti is celebrated as the Festival in Hindu calendar.

He was born on 23rd January 1897 at Cuttack, Orissa. He was one of the prominent freedom fighter of India. He has his own army known as Indian National Army (INA) or “Aajad Hind Fauj“. He also bring Indian people army from foreign and led army against the British force. His death is mystery on one knows the exact history behind it.

This day is recognized to spread the awareness among the society regarding the inequality crime with the girls. This step is toward the Girl Empowerment.

National Voters’ Day is recognize to spread the awareness in the Youth to know the power and importance of vote.
Indian Tourism Day is celebrated to aware the people regarding the importance of tourism.

This day is celebrated with great proud because on this day in 1950 our national constitution was came into effect in Independent India.

On 28 Jan 1865 Lala Lajpat Rai was born in Punjab. He was the popular and main freedom fighter and played an important role in independence of India. He popularly Known as Punjab Kesri and also known as Lion of Punjab. He laid the foundation of Punjab National Bank (PNB).

This day is celebrated in all over the nation to the honer of brave martyrs’ sacrifice for the nation. This is the darkest day in Indian History because on this day in 1948 the Father of Nation Mahatma Gandhi was assassinated.

This day is celebrated internationally as a public awareness around the whole regarding the disabilities due to the Leprosy disease.