Skip to content
February is the second month of the year and it has the list number of days as compare to the other months but there are many important days in February month. It has 28 days but in leap year i.e. every 4th year one day is increased and total no of days are 29. In Hindu calendar it is also called as Falgun and winter is going and summer is coming in this month. There are many important days which are celebrated in this month and they all are very important as exam point of view. Not only for exams, it is important to know the self-awareness.
So here in this post we provides some important day’s list with their cause with best of our knowledge. 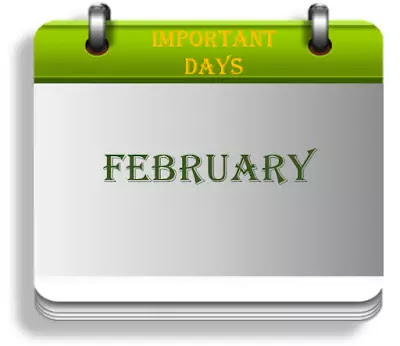 Some Important Days With Their Cause:

On this day in 1977 the foundation of interim Indian coast guard was laid. It is established to save the invaders’’ goods ships entering the country and damaged the Indian economy. It is one of the main Indian force wing which protect and maintained jurisdiction over the territorial water of India.

It is celebrated internationally to save and protect the natural Wetlands and secure the Biodiversity which is in danger. First time it is observed on 1 February 1971 in Ramsar, Iran.

This day is celebrated every year globally and organized by WHO to spread the awareness regarding Cancer. Theme of this cancer day is to empower the action taken against the disease and strengthen the future.
Sri Lanka celebrate this day as Independence Day because they got their freedom from British.

This day is observed internationally on 6th February in every year. This is celebrate to spread the awareness and education in the community regarding the consequences and problems faced by Female in the Society.

The first week February is celebrated as the International Development Week. This is celebrated to make people aware from the new roles and career path in the future. It shows the development of the region worldwide and allow people to know more about it.

This day is celebrated as the birth anniversary of the Charles Darwin who was born on 1809. This man is known as father of evolutionary biology. This day is commemorated to highlight his contribution in plant science and bring evolution in the biology.
12 February is also celebrated as the Lincoln Day to commemorate the birthday of great and most popular president in united state history Abraham Lincoln.

World Radio Day is celebrated to spread the awareness regarding the importance of Radio in modern technology. It is also the primary source of communication in many country. It is the best communication method in any disaster.
Sarojini Naidu is the first Indian women president of Indian national congress. She was born in Hyderabad on 13 February 1879. She is one of the most popular women in Indian history for her contribution toward nation.

This day is celebrated all over the world to spread the love and peace. This day named after the Catholic priest Saint Valentine who live in Roman in 3rd century.

This festival starts 18th February and lasted up to 27th February. This festival is celebrated at Delhi, Agra to represent the rich culture heritage of India. Taj Mehal is great example of architect and love. It was built by the great Mugal emperor Shah Jahan in 1631 in the memory of her wife Mumtaj Mahal.

This day is observed 20th February every year to tackle the issues like exclusion, poverty and unemployment. The main motive behind the celebration of this day is to raise the awareness and support the people who are facing problems in the society.

This day is observed worldwide to aware the people regarding their culture and language. This is the one main step taken by UNESCO all over worldwide to aware and protect the diversity of rich heritage culture and regional language. This is very important to know the importance to language diversity. It was first announced by UNESCO on 17 November 1999.

This day is marked on the birthday anniversary of the Pioneer of Scouting Lord Baden-Powell. This day is celebrated by millions of scouts all around the world at national and international level.

This day is celebrated to encourage the sprite excise department for extreme job to prevent the country from the corruption and perform the better law in the country for their development.

This day is celebrated all over the world to raise the awareness and attention of people regarding the NGOs and their contribution to the humanity.

This is the one of the bright day in Indian science history. On this day in 1928 Indian physicist “Sir Chandrasekhara Venkata Raman” discovered the “Raman Effect”. This is the great discovery and he was honored by the Nobel Prize in Physics subject in 1930 for his discovery “Raman Effect”.