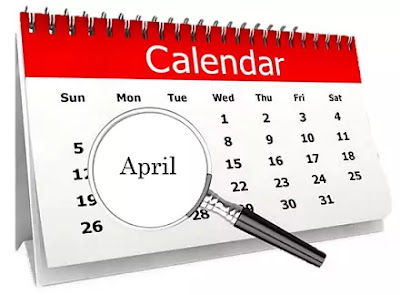 List of Important Days With Their Dates and Cause:

Odisha day is celebrated in the state of Odisha in the memory of the formation of new separate stated on 1 April 1936 under the rule of British based on language.

International Day for Mine Awareness and Assistance in Mine Action Day is celebrated to aware the people about the landmines and progress toward their eradication.

A hundred years ago, on this day in 1919, navigation history was made when SS Liolty, the first ship of The Scindia Steam Navigation Company Limited, sailed to the United Kingdom. “Indian Ocean-An Ocean of opportunity” was the theme of the 56th edition of National Maritime Day. This day was first observed on 5 April 1964. The National Maritime Day Award is called the Varuna Award.

Every year 6 April is celebrated as International Sports Day to remove cultural disparities and development at the international level by the Games between different countries.

World Homeopathy Day is celebrated in the honor of the birth of Dr. Samuel Hahnemann, known as the father of the Homeopathy system of medicines. He discovers the homeopathy medicines to heal human wounds and diseases.

National Safe Motherhood Day is celebrated on 11 April in every year. This is an initiative of the white ribbon alliance India to give facilities and adequate access to their care during their pregnancy and provide them sufficient medical services.

This day is celebrated to show your love towards your pets. The aim behind this day is to memorize the owner that they have some duty and responsibility toward their pets.

International Day for Street Children: Louder Together was launched on April 12, 2011, to give a loud voice to millions of street children around the world, so as not to ignore their rights. In 2017, the United Nations specifically acknowledged the rights of these children in a document called General Commentary on Children (No.21) in Street Situation.

The United Nations General Assembly passed a resolution on 7 April 2011 and declared 12 April as International Human Day. 12 April 1961 was the date of the first manned space flight, carried out by Soviet civilian Yuri Gagarin. This historical occasion opened the path for space investigation to assist all mankind.

Also known as the Amritsar Massacre which took place in 1919 on 13 April, which brings the new turn in Indian History. On this day hundreds of Indian people were killed by the British army on the order of General Reginald Dyer at the ground Jallianwala Bagh, Amritsar, Punjab. So to commemorate this disaster this day is celebrated every day in India.

World Hemophilia Day is observed all over the world on 17 April, this day is celebrated every year to spread awareness about Haemophilia and other genetic bleeding disorders. “The First Step to Care” was the theme of World Hemophiliac Day 2019. World Haemophilia Day was started in 1989 by the World Federation of Haemophilia (WFH), which began celebrating on April 17 in honor of the birthday of WFH founder Frank Sabenable, a decision to bring the community along

In the year 1983, April 18 was declared as World Heritage Day, it aims to make people strive to preserve the cultural heritage of their country and world.

Civil Service Day is observed every year on 21 April. The present common administrations of India are for the most part dependent on the example of the previous Indian Civil Service of British India. Warren Hastings established the framework for common help and Charles Cornwallis improved, modernized and excused it. Therefore, Charles Cornwallis is regarded as the father of civil service in India.

Earth Day was started in the year 1970, its purpose is to inspire people to save the environment. Today in more than 192 countries, April 22 is celebrated as Earth Day.

Inspired by the spirit of high-purpose international cooperation and development, the World Book and Ownership (Copyright) Day was formally launched on 23 April 1995 by UNESCO, an organization of 193 member countries and 6 associate members.

In the United Nations, English Language Day is commended on April 23, a date generally celebrated as both the birthday and date of William Shakespeare’s passing. The day is the aftereffect of a 2010 activity by the Department of Public Information, which sets up Language Day for every one of the association’s six authority dialects.

National Panchayati Day is declared on 24 April 2010 by the Prime Minister of India Manmohan Singh at that time. This day is celebrated to commemorate the formation of the Panchayati raj system in all over the country.

Every day has its special significance, ‘World Malaria Day’ is one such day, which was first observed on ‘April 25, 2008’ UNICEF aims to celebrate this day by focusing public attention on dangerous diseases like malaria.

28th April: The World Day for Safety and Health at the Workplace

The World Day for Safety and Health at the Workplace is an annual international campaign to promote safe, healthy and civilized work. It is held on 28 April and has been seen since 2003 by the International Labor Organization (ILO).